On a beautiful, late spring day in 2010 my wife passed away peacefully with two beloved dogs by her side. It was the end of a long and difficult journey that began six years earlier when she found herself occasionally unable to grip things tightly with the fingers of one hand. As the problem worsened we visited doctor after doctor, hearing theories from carpal tunnel syndrome to tennis elbow. Many admitted they simply didn’t know.

She doggedly pursued a diagnosis until at last we visited a doctor in Oklahoma City who knew at once what was happening. Finally she had her answer, but it was heartbreaking. The physician told her she had corticobasal degeneration, a rare neurological disease, and he referred her to a specialist in Houston. On July 2, 2009 she was given a year to live. She died eleven months later.

When all this began I was an executive in a company that manufactured computer parts. I had begun to reduce my work schedule as her physical health steadily deteriorated. By the time she got her diagnosis I was in the office only seventy percent of each workday.

Once we knew what she was facing she immediately resigned from the job she loved as a top sales and training executive with a New York Stock Exchange-listed company. Her theory was that when you had a year to live there was no time for working anymore. As the months progressed and she lost the use of her hands and legs I stayed home more and more. By the time she couldn’t walk, hold a fork or close her fingers around a cup, I went to the office only rarely. I did some work from home but most of my time revolved around whatever she wanted or needed.

Immediately following her death was the usual whirlwind of family, friends, visitations and funeral, and then one day everyone went back to their routines except those two dogs and me. For the first time in forty-two years it wasn’t us anymore. It was just me. It was a dark and overwhelmingly sad time.

I had been in the corporate world over fifty years and for the past twenty I’d had the pleasure of working with my son who had started the computer company at age fourteen. I had created, operated and sold a dozen enterprises over the years and I had a blast doing it. I had traveled the world, wined and dined clients and was on top of my game until life dealt us the hand that wrenched my partner away from me. A few days after her funeral I went back to work but it seemed like I was simply going through the motions. I’d been a part-time employee for the past eighteen months and I had a hard time getting my mind back in the groove.

My passion had always been to write a book. A year before she died my wife talked me into finishing a manuscript that had sat in a file for years. Wrapping up that book became the fulfillment of a dream. Opening the box from my publisher and seeing a book with my name on the cover was an awesome, exhilarating experience. I wanted more of this. As my wife had poignantly said, there’s more to life than working.

Once she was gone I wrestled with taking a leap of faith, leaving the security and comfort of a real job and becoming a writer. Then my son got an opportunity to sell his company. I took it as a sign from God that it was time to do something new and different. I left the company, set up a home office, budgeted my time just as I always had, set daily and weekly goals and adopted the mindset that writing was my vocation.

It took a year to finish my second book and only then did I consider myself a full-fledged author. But along with the exciting part of each day—the time when I got to put words on paper—there were other things that had to happen now. My books weren’t going to sell themselves, and I was an indie author—I didn’t have an agent or a publisher on whom I could rely for marketing assistance. I took online courses and read dozens of blogs on marketing. I learned social media—not an easy task for a baby boomer—and I arranged bookstore signings and book club visits. All the while I continued writing. I completed two books each in 2014 and 2015 and three in 2016. And today I still love every minute of it.

I write almost every morning but I also make time to do things I want to do—like joining my new wife in running errands and getting things done around the house. Between us we have seven grandchildren and we see them as often as we can, because that’s a critical priority for us. I call this my second chance—life after death.

My milestone seventieth birthday is coming right up and I feel blessed to have been given an opportunity to live again after the excruciating pain of losing the girl I had loved for decades. I’m glad I picked myself up and decided to follow a dream. Money isn’t everything—in fact, it’s way down on my bucket list. I always loved to travel and it’s a big priority for my wife and me now. We’ve seen wonderful places since we married. My career as an author is moving along—I’m working on my tenth novel—and my marketing and publicity efforts have begun to pay off with monthly royalty checks that give us extra spending money to do the things we want.

What may appear to be the end of your life may in fact be simply the end of a chapter. Some people will never turn the page to find out, and I can understand that. Everyone handles death differently but I’m a living example that even in your sixties it’s possible to start a new chapter in life and find fulfillment, peace and happiness. 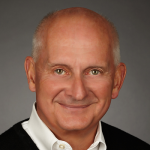 Bill Thompson became a corporate entrepreneur early when at age 12, he started a company that bought and sold coins. By age 25 he had founded an insurance agency that became one of the largest in Oklahoma. Expanding and adding to that firm, Thompson created a financial services holding company that operated in several states plus Bermuda, the Cayman Islands and England. He later sold his interests and joined his son as an executive in a computer memory manufacturing and distribution company, which by 1995 had grown to be in the top ten nationally by sales.

When that company sold, he decided to pursue a lifelong passion—writing archaeological thrillers. His burning interest in ancient sites, mysteries of the past, unexplained things in the jungle and stories of adventure in remote places drove him to frequent trips around the world. He has visited numerous historically significant sites, including Machu Picchu, Stonehenge, Avebury, Egypt, Petra and many ancient Olmec, Aztec and Maya cities in Mexico, Belize and Guatemala. Read his book, Order of Succession.

Moving After Retirement? 7 Steps to Consider

8 Tips - How to Become a Speaker With Influence

An Easier Way to Do End of Life Planning

How Writing a Book Connected Me to My Parents

The Unexpected Dangers of Isolation – How to Help Seniors Avoid It